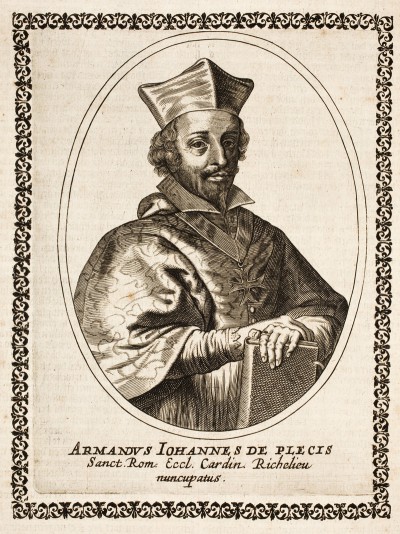 Today we want to wish a very happy birthday to Armand Jean du Plessis, the Cardinal Richelieu (1585 – 1642).  Although it is a bit much to regard Richelieu as the architect of the modern French state, there is no question that he had a profound impact on the development of 17th century France.

As the younger son of the du Plessis clan, he was destined for the church with his first bishopric at Luçon where he acquired a reputation as an able administrator and serious pastoral minister to his flock.  Richelieu rose quickly and was installed at the court of Louis XIII where he competed for the favours of the king against the king’s mother, Marie de Medici during the king’s minority when his mother acted as Regent.  Richelieu was exiled to Avignon in 1616.  This was the beginning of a rocky career for the Cardinal in the political world of the Bourbon court.

By the 1620s Richelieu was back at court and again in conflict with the Queen Mother who with the king’s brother Gaston d’Orléans had tried to secure Richelieu’s permanent exile.  This time it was Marie that lost the contest when in 1630 during what has become known as the Day of the Dupes (11 November) when Richelieu outmaneuvered his enemies and convinced Louis to exile his mother to Compiègne.

While Richelieu with the full support of crown weakened the provisions of the Edict of Nantes that had granted religious accommodation to the France’s Protestants, he was pragmatic enough to make common cause with European Protestant powers during the blood bath known as the Thirty Years’ War in attempt to increase France’s position among the European powers.

Richelieu’s legacy has spawned an entire cottage industry trying to fully explore his impact on French history.  Often portrayed as a Machiavellian villain (thanks Dumas), the fact is Richelieu was a dedicated servant of the state who also had no qualms of meeting his own ambitions in the process.  While not the architect of the modern French state, Richelieu remains a towering figure whose presence dominates the landscape of early modern French history.